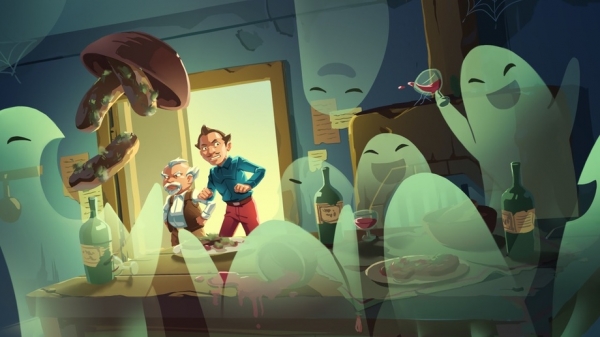 We had this letter we found on the now dead sheep herder with an offer for him and his father to come shelter at a nearby estate and ride out the winter.  With the devastated sheep stores, starvation for the town of Krusk was a real possibility so we took upon ourselves to look into it.  We had some discussions on how to do that.  Is there any authority figure left we could bring? Not really.  We decided to have Lord Q do the talking, bringing the bad news about the deaths and go from there.  With Lady Patrina making the announcement, the butler was impressed enough, at least with those two, to let us in and give us an audience.  But we had to give up our weapons at the front door.  All complied except for Ezra who chose to guard the front door rather than give up his Holy Avenger.  Loki left his pistols with him.

She was hosting a big party for nobles across the land.  We talked to her in her study but she had no idea what we were talking about.  When shown the letter, she agreed that it was in her hand with her seal but had no recollection of writing it or sending it.  She and her party seemed to be out of step with the current world conditions.  Loki asked her what year she thought it was.  What an odd question? Why do you ask? You seem out of touch.  That did not go over well.  Brian had Dave make a persuasion roll to see if he could have possibly said that without sounding insulting.  With an 8 charisma, no proficiency and a roll of a two, it did not go well.  Loki stopped talking. (Dan: This happens over and over.  Not proficient with a charisma skill?  Just shut up and let the charisma character talk, roleplaying isn't going to do it.) Despite this, we were given a tour of the house, given a couple rooms to freshen up and invited to join the party.  A couple of words on the tour.  We saw no weapons on the guests or all the walls.  Being players, we were planning on trouble.  Ambrus noted that the locks throughout were of the highest quality.  Maybe 30+ guests?

We mingled.  Everybody rolled terrible so anyone that tried something, failed and those that just wandered about, heard some random things.  This family is known for their tech and architecture and had designed Ravenloft castle.  Ambrus tried to break into a room but only rolled well enough to determine it was going to take a 35 roll to do it.  Attempts to get some background on the guests and servant were dead ends.  There was mention of a hedge maze out back that was known to be unsolvable.  But the key items came from the host or about her.  She had recently broken off her engagement with Dimitri, the leader in Krusk.  However, the man we had met a wife and grown kids.  She also thought the guy in charge was his long dead father.  We again concluded that this place was outside of time somehow.  Lord Q did manage to talk her into letting the Paladin of the Morning Lord come in with his sword and join dinner.

She excused herself from dinner and the next thing heard was a scream from the butler.  She’s been poisoned! The players were ready to jump into action but held at bay while Brian described the grisly scene.  Basically, all the guests died a horrible, bloody death but none of the players had any trouble.  Once all dead, the mansion transformed into a run-down older version of itself and all the bodies were gone.  Again, players were trying act but Brian skipped all that and just put us together in the main room with our weapons.  We went to her salon and found her body.  Before we could act, a vortex of time bending energy swirled.  A spirit emerged from her body and said something about being betrayed and they should all rot in hell or some such.  It then flew through the wall.

Ambrus watch it through a window and it went to the hedge maze.  To no one’s surprised.  Lady Patrina found two keys on her now decayed body.  There was some discussion about what to do but Ambrus was so eager to reinvestigate the lock that had thwarted him, he must have mentioned it 5 times in 2 minutes.  But it was as good a plan as any.  The first room was some sort of study.  It had high quality artwork including what we assumed was a portrait of the most famous family member.  It was obvious something important had been removed from the wall.  Beyond was a passageway leading down into the basement, crypt, ???  We deferred that.  The next room was a private office with various books and ledgers.  Among those was a journal which Lady Patrina was about to shove into her pack but Loki asked about the date of the last entry.  It was 25 years ago, as we had expected.  In addition, it told of her intention to break off her engagement prior to her upcoming party.  She figured that would avoid a scene and allow her to start finding someone new.  So, we concluded he, Dimitri whom we had just tried to save the night before, had poisoned them all.  She did not want to give up her life and lands and titles.  She also said something about him never finding her family vault as it was not in the basement but in the hedge maze and only someone with both family crests could possibly penetrate it.  So, we need to find those, I guess.  One has already been taken.

Portable Hole - Lady Patrina took to hold her books.  At the bottom of which was …

Wand of Conducting – makes symphony music, 3 charges – Kharn because he wasn’t there to say no.

That took up some time and it was almost 12 so we stopped.  The offer of extra food seems like it’s 25 years old so we’re not going to succeed there. (Dan: As mentioned the lady didn't recognize the letter.  Either its a ghost thing to not remember it or it was some wierd plot twist.  If Demitri was sane I assume he would have remembered he killed everyone here and told us not to bother or it was a trap.)  Loki did do a search of the grounds during the party in hopes of finding a storage building but rolled bad so maybe another search is in order.  I suppose we will try to solve the hedge maze and try to put this spirit to rest.  But we’ll want to search the rest of the house for those crests first.  No one could recall seeing something like that at Dimitri’s house but if you poisoned 30+ people, would you keep a reminder of that around? We might look for plans of Castle Ravenloft as well in case we ever have to sneak into it.