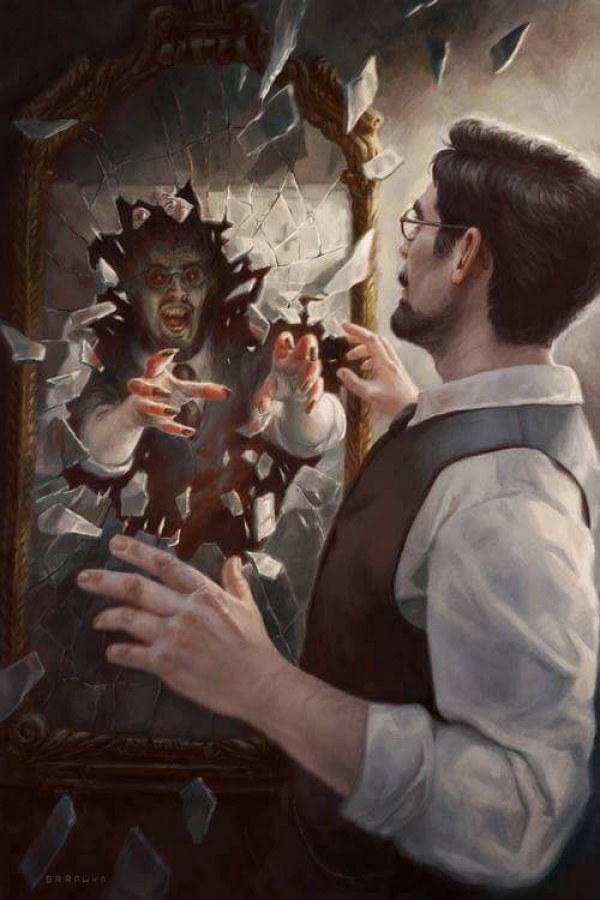 Poof! The Racoon faded out and the berserker gypsy suddenly existed. Exploring the house we found a room full of mirrors.  Inside one of the mirrors, Ambrus saw the placard hanging on the wall.  He sent his mage hand into the mirror world, grabbed the placard, and pulled it out of the mirror.    Meanwhile, his mirror image stepped through and attacked him.  Kharn ran in to attack the image and then an image of him stepped out to fight us.  Patrina cast darkness and Kharn vanished but her own was still there since she can see in her darkness... oops.  Patrina’s image dispelled the darkness and mirror Kharn reappeared. Then Lord Q cast fog cloud.  During this, the monk stayed out of the room and did a fog horn imitation allowing the people inside the fog to navigate without activating the mirrors.  Someone got the idea to cover the mirrors and Kharn then covered the mirror with a billowing cloak. In the next few turns, the party scavenged moldy tablecloths, blankets, and curtains to block all the mirrors in order to negate the mirror images. Once most were covered the fog was disbursed and the remaining mirror had a second crest.  Ambros cast invisibility and went in the mirror and grabbed it while everyone else stayed outside the room. So we seem to have two crests.

While exploring the rest of the house Lord Q came across a phantasm figure wearing armor.  Meanwhile, Ambross and Kharn had a short rest to heal up from beating themselves up in the mirror room.  Since Lord Q had no backup he closed the door. When everyone was ready we all went in but Ezera effectively soloed the phantasm with one 20 HP hit and another critical smite 82 HP.  The ghost just wanted to end his life in glorious combat instead of by poison.  Hopefully being one-shotted by the paladin counts.  Although the monk wanted the armor as a wall trophy, it was finally decided it go to the paladin.

Continuing our exploration we found a magical haversack that finally went to the monk.  Later explored the bedroom we originally stayed in during the groundhog cycle and found it full of zombies.  One with a big glowing fist.  We won after a short combat, partially due to the undead being limited to having to attack through a doorway.  The zombie with the glowing fist had a bracer that gave +1 damage and hit to natural weapons and unarmed attacks.  The monk got this.  It was late but it was hinted that there was only one more room on this floor so we continued.  The next room over we found the second half of the bracer set that gave an additional +1 hit and damage (total +2).  Yay!  At this point, it was after 1:00 AM so we called it a night.