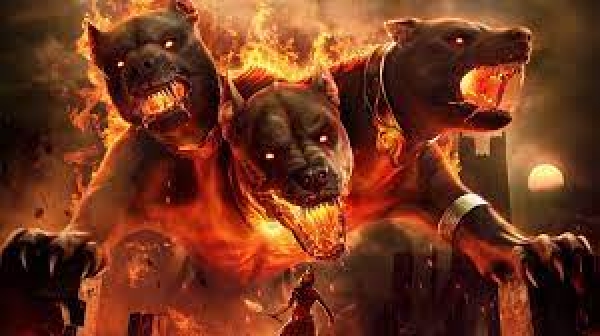 We started at the entrance to the hedge maze.  We were armed with the two family crests, seeking two fountains to unlock the crypt.  We moved on initiative order which slowed things down.  Just inside, we could see the crypt but there was a gate with no lock.  We surmised pretty quickly that it was just there to mock us.  But we spent some time trying to figure out how to circumvent the maze and go directly in.  We could not.  We headed into the maze, coming upon twin fountains fairly quickly.  Again, we figured that was too easy but spent time investigating them.  When Ambrus finally put them in, nothing happened.  Meanwhile, every round everybody heard a spirit rattling howl.  It was a modest Will save or take a die of physic damage.  And those that missed that had another save or be stunned for a round.  Loki missed the first one and others missed throughout the night.  Those that happened to end up near the Paladin with the round-based movement, got bonuses.  We could sense a huge beast flowing through the maze.  After a few rounds of bumbling around, it was upon us.  By the way, the closer it got, the harder the saves.  It went from DC10 to DC15 to DC20.  It wasn’t much but it added up.

So, the huge 3 headed dog appeared.  Patrina tried to cast Slow on it but was told not to bother to roll as it was immune to that.  Loki fired away with his (relatively) new pistols, hitting 3 times and doing a point or two.  The Monk hit it several times with various energy types and almost all of it bounced.  He did manage to stun it with a couple of Ki points(Dan: it took five points to stun it twice).  Then Ezra hit and smitted it with a 2nd level spell and did almost nothing.  It broke down like this.  It took 10 points off the top for any attack.  It was resistant to all damage types tried including magic, all elements, physic, etc.  It was immune to necrotic, radiant and crits.  So, if you hit for 15, you did 2.  It also had advantage on all saves.  We quickly concluded we could not defeat it via hit point attrition.  Now what? Stand, fight and keep trying things.  Flee and try again with a new plan? The trick with that was getting everybody out alive.   Right before the fight, Ezra found a statue of the family matriarch.  It advised seeking guidance from statutes near fountains in the NW and SE corners.  So, we decided to split up.  The fastest Ambrus headed NW.  Loki and the soon to overtake him Kaladin went SE.  The rest, led by slow moving Ezra would try to keep it distracted.  And we’d met at the crypt?

So, Ambrus blazed ahead, with NPC Ireena following.  The beast ignored Ezra et al and caught up to Loki and Kaladin.  It could move through the maze, ignoring walls and opportunity attacks.  Kaladin attempt to lead it out of the maze but it didn’t follow.  Between the stuns and movement, it final got a chance to attack, criting Loki for 20+ and missing Ezra twice in his new full plate.  (3 heads)  A round or two later Ambus found the statue and a fountain without water.  He attempted to examine it but we were taking damage every round.  People were throwing out ideas that Ambrus couldn’t hear.  Eventually he just put it in the empty fountain at DG’s suggestion, figuring an empty fountain was still a fountain.  The water started and the statue smiled approvingly.  The next round Loki did the same in the SE and the crypt opened.  So now it was a race back.  Ireena got rocked and almost killed as she ran into the beast coming back.  Patrina hit it with a Tashia’s and with the last inspiration in the party (Loki’s) made it save again(Dan: I don't remember this, I remember trying to stun it with my last ki point, failing and someone else used an inspiration to make it miss its save.  Did Patrina hit it before or after this?).  With it incapacitated for a round, she and the rest managed to get into the crypt.  By the way, it would not cross the threshold into the inner court yard.  The crypt had stairs going down and we stopped there.  They either took a short rest or we’ll start with that next time.