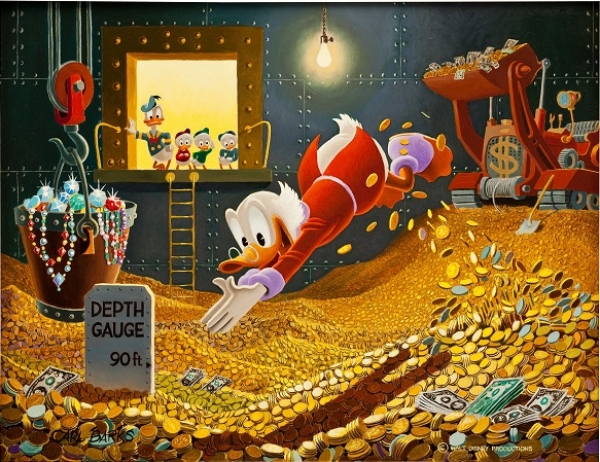 We finished a short rest just inside the crypt.  There were stairs down into a large room.  On the two sides were 3 coffins each plus a larger one dead ahead.  However, the most noteworthy feature was piles and piles of coins, gems and rare items.  None of us believed it, of course.  So, after a couple of rolls, looking for traps and illusions that revealed nothing, Ambrus stepped in.  Using his Mage Hand, he touched a gold piece and the spirit we were chasing appeared in the doorway behind him.  She said something about disturbing the whateverakov family crypt and prepared to attack.  Initiative.  Since Ambrus was forcing the action, he got an automatic 20 and went first.  He did his sneak attack.  Unfortunately, he could not log on and DG was rolling for him.  He used the regular dagger instead of the new +3 dagger.  Wade was unsympathetic.  So, some of that damage bounced.  Others attacked as they thought best.  When she went, she let loose a howl.  Anyone who missed the save, went directly to 0 hit points and started to make death saves.  It was a CON save which is not a common save proficiency but a common stat at least.  Thanks for coming, Kaladin, Ezra, Ambrus and Petrina.  Those that made it, took 3d6? of physic damage.  It then attacked with a fearful gaze.  All that failed that were frightened, taking disadvantage on every roll plus could move no closer to it.  As usual, after round one, we figured we were dead.

Several Skeletons also appeared as well as an actual ghost.  The first was technically a Banshee.  Both had loads of resistances like most everything we face these days.  The program didn’t work right and Ezra didn’t get the advantage he should have on that first save so retroactively he was still in the game, wreaking havoc on the undead as usual.  The ghost tried to possess Lord Q but he saved.  Noble breeding wins out again.  Next it tried to get Ezra but that didn’t work.  It did age Ireena 20 years though.  DG started pondering the life expectancy of a raccoon.  Lady Patrina took out most of the skeletons with a radiant Fireball although it did put Ambrus one death save from death.  People were revived and attacked.  But the saving grace was that the Banshee seemed to be only able to do that first scream once.  Once per round and we’d be dead.  So, we kept swinging.  Kaladin was revived but was still afraid so he couldn’t move into melee range.  After a few rounds, it was all over.  When she “died”, we felt a pulse of energy shoot through us.

At this point, we returned the body to its final resting spot to stop the curse of the time warp.  Except that no one had brought the body.  Doh! And there was no coffin with her name on it.  What? So, we were confused and started to panic.  Was this all for nothing? Do we have to get the body and do it again? Trying to track these plots over 3 months of real time is tough.  Lady Patrina made a good religion roll and told us that she thought we had “done it”.  That pulse of energy was her spirt moving on.  Hopefully.  We all agreed that the treasure was an illusion or trapped or cursed, i.e. too good to be true.  Except Lord Q and Lady Petrina who insisted on messing with it.  The book was Identified as a Manual of Iron Golems.  The trident was +3 but anyone who took something was cursed.  Disadvantage on all rolls.  Lady Patrina’s Remove Curse spell did no good.  Eventually, we were able to move on.  I think we took a short rest during all that.

We emerged from the crypt and somehow it was morning.  We could see a servant working in the garden.  And the manor house looked to be in good repair i.e. as we first saw it and not run down like it was 20 years after the curse.  We started to panic again. Do we have to get the body and do it again? All agreed to get out of the maze ASAP before the dog returned.  Except Lord Q who was concerned that we might need the crests again to regain entry.  As he and Ambrus debated it, they heard the howl again.  Luckily, they both saved and eventually we all got out.  The servant questioned us and headed to inform the mistress.  We decided to go to the front door and ask for food like we had the day before.  This time, she looked around 20 years older.  There was no party being prepared.  We showed her the note and again she recognized her handwriting but didn’t remember writing it.  Then she recognized the cloak Lord Q got from the chest in her office.  At this point, Ezra decided to “come clean” and told her the whole story.  Skipping over the parts about us breaking into her office.  She was confused but intrigued.  We stayed for lunch.  Our paladin rogue offered to return the +3 dagger but she still had the one in the chest.  It was all very Back to the Future.  I mean if all these people lived another 20 years, did they impact the timeline?

So, she remembered breaking off her engagement but that was 20 years ago.  She seemed unaware of any problems in the village but was willing to provide some food.  We stayed the night.  In the morning, we headed out with a wagon of food.  We didn’t get far before we ran into another old peddler lady wandering the road alone.  This one was selling tools and such.  Ambrus bought some spikes and door stops and overpaid.  She gave him a doll that parents give children to protect them from night spirits.  He gave it to Ireena.  At the gate, Lord Q was welcomed.  He triumphantly presented the food and asked who was in charge so that they can distribute it.  We were informed that the mayor took his own life last night and that the town had elected Lord Q as the new mayor.  He is a Lord after all.  After consulting with the town guard, he assigned the lead farmer to be his steward and put him in charge of the food.  We started talking about what we were going to say to the Abbot when the NPC noted that the doll was pointing out of town.

So, we voted to follow the doll, figuring it was Wade’s way of guiding us to an adventure.  (The fools.)  It led us out of town and back to the road.  After two nights with no end in sight, we voted to return to Kyresk.  Personally, I think it was Strahdanya again, forcing us back to her dinner party invitation.  On the way back, we came across a body nailed to a post at a cross roads that wasn’t there the day before.  A tracking roll told us they came from the other road.  A history roll told us that down that road was the Keep of the Order of the Silver Dragon.  A goodly knightly order that was founded by a silver dragon.  He was killed and the order wiped out around the time Strahdanya took over.  It tied into Kaladin’s back story and destiny but we just could not start another thread so we kept on our original path back.  We buried the body and Loki could sense someone watching us.  When we pulled back into Kyresk, we ended for the night, still gazing at the monastery at the top of the hill.  The same goal as over 6 months and 13 games ago.