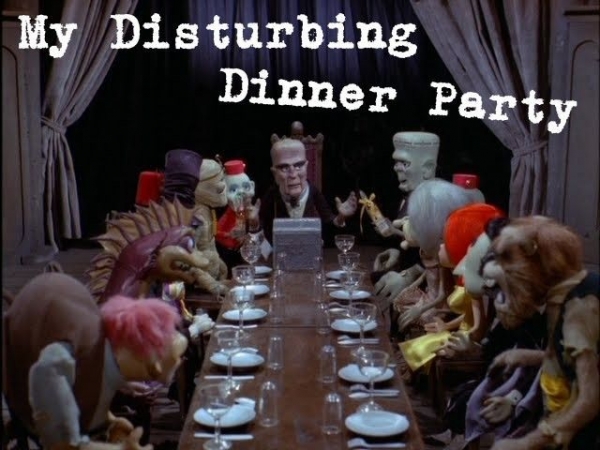 We started, facing what we assumed was Stradhanya’s encampment with the innocent Vistani girl staked to a chain like a dog as bait.  This is the girl whom we rescued from being sacrificed to the Balrog but whose whole family had been killed before we arrived.  Lord Q was in favor of avoiding the whole thing.  Late arriving Kharn had already voted to avoid via email earlier.  He already had 2 vampire bites and was not looking to ever meet Stradhanya again.  Lady Petrina was not in attendance and Kaladin didn’t seem to have much to say.  Ezra and Ambrus however could not leave an innocent girl to suffer because of us.  Loki threw in with the Paladins, knowing that they would not be able to leave her.  So he figured we might as well get it over with.  The girl looked stoic enough but the Inciteful could tell she was terrified.  It was obvious to all that she had lost weight in the week since her obduction.  Ezra opened the tent and was greeted by the vampire, her lieutenant and a couple of servants.  She did not detect as evil, by the way.  We were invited in and eventually all came in.  Ezra stood by the door and glowered at her with righteous fervor.  Somewhere, in there, Paul logged in and returned to existence outside the tent.  He tried to sneak away but she heard him.  But didn’t stop him.  He stayed within gun fire hearing distance.  What followed was a long conversation with veiled threats and pretend courtesies.

Ambrus volunteered to do most of the talking, focused on freeing the girl.  The first offer was for one of us to replace her.  That was a nonstarter.  Eventually, we got back around the dinner invitation.  After some back-and-forth negotiations, Ambrus agreed to having that dinner in 1 week.  She provided a crystal that when broken would summon her carriage to bring us there.  There were promises of safety etc.  Loki agreed as well although he was concerned about the time constraint.  We get attacked every day in this place.  Kaladin said, “yeah, whatever”.  Ezra established that he would not give up his sword.  Lord Q talked in circles, arguing semantics of everyone’s words and never really said yes or no.  The lieutenant was sent out to free the girl and tried to Intimidate Ezra into stepping aside.  He rolled a natural 20 on his Wisdom check and held his ground.  Once freed, Loki exited and the rest followed.  He gave her a Good Berry which helped.  Once away, Ezra cast a Protection from Evil in hopes of dismissing any charms, curses, etc.  We escorted her to town with a letter of introduction to get her up to Ireena at the abbey.  Loki suggested she could leave with the next Vistani caravan that came by.  We finally got onto the road.

We went on to the Wizards of Wines to ask about the ravens.  We were quickly sent to the head of the Molativ family.  This time, thanks to our efforts to save them, he came clean.  They had received a blessing from one of the Archefey, the ability to transform into a raven.  (Madam Eva if anyone cares.)  Sort of like lycanthropy but voluntary.  They could also speak to ordinary crows.  This was their main method of gathering intelligence.  (For example, he told us that the revolution that we were thinking of aiding had happened in Valaki.  But that the new lady seemed to be more pro Stradhanya.)  He gave us a secret handshake or something to identify us as friends of the family.  In order to send messages back.  Loki also pointed out he had the Speak with Animals spells which makes them more useful.  We’ll take any allies we can get.  When asked if Stradhanya was using the ravens as her spies, he dismissed that possibility with a wave.  They also gave us some intel on Berez.  It was destroyed thousands of years ago when they dared to rebel against Stradhanya.  It is now home to a group of witches.  Additionally, the Archfey that we’re supposed to rescue is being held by Baba Yaya, which sounds like another hag.  According to a nursery rhyme, she lives in a hut the walks around the forest on chicken feat.  Do the witches answer to her or are they unrelated? Ambrus suggested we try to find her first to split the problem but we didn’t get that far.

Back on the road, we ran into a Flesh Golem like the one fought at the abbey.  It was killed in one round.  A Tracking roll seemed to indicate it had come from the abbey.  It looked like an early attempt at a Kharn clone.  We decided to stick to the roads rather than try our luck overland.  We resisted the temptation to divert to the tower of the slightly unhinged vampire hunter.  We got delayed by a driving rain storm.  We resisted the temptation to divert to the sliver dragon keep.  The next random encounter was more substantial.  It was a gargantuan fog elemental thing.  It got 4 tendril attacks with 40+ reach.  That did no damage but it grappled and restrained and then dragged to the “mouth” which did a ton of damage.  And since you were restrained, it got advantage.  Its AC was good, it had a ton of hit points and various resistances against weapons, magic or no.  Since it wasn’t a regular attack, Kharn’s rage resistance did not help so he got rocked.  It took a good roll to get free from the tendril but it cost your action unless you beat it by 10.  We grinded through it and only Kharn went out right at the end.  But it was defeated.  The next day, we ran into a weird plant-based ball? We decided to stop before starting that fight. We only have a couple days left on our week and still some distance to go.