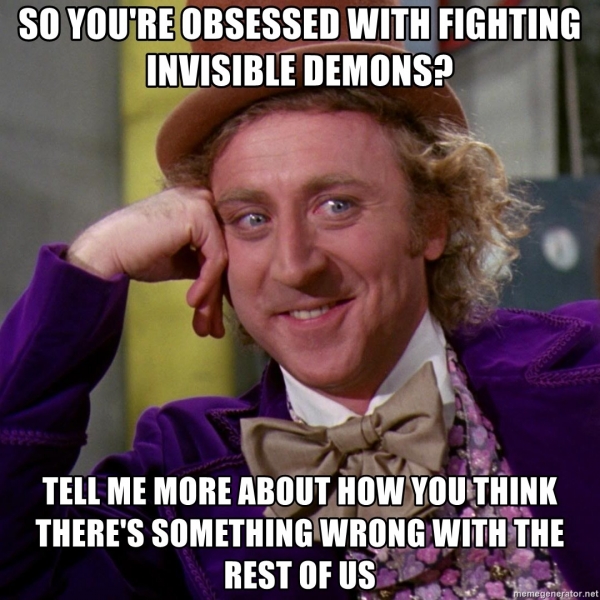 We started with some pointless discussions with the infernal police, investigating the destruction of the Pit Fiend we killed weeks prior.  (Actually, the first step was pleading for a short rest from last time.  Which was granted, not that it did much good.)  The Ranger played dumb but the Paladin with the honest face admitted to helping him return to his home plain.  However, evidently, he never got there.  As we well know, no one can leave this realm so we suggested they talk to Strahdanya.  She makes the rules around here.  To no avail.  We also questioned their authority.  “Where are your stinking badges?” As bad as this place is, it is not a plane of hell.  She claimed her authority came from the top but we suggested that Strahdanya was the authority here.  With dreams of them fighting it out.  They were unimpressed.  Lastly, we pointed out that they were now as trapped in this land as we were and perhaps their efforts should be focused on that and not us.  Shut it.  They demanded we drop our weapons and/or offensive implements and “come along quietly”.  The Warlock offered to comply if they first returned to their native plane to prove they were not as trapped as us.  No one on either side was going to go for that.  With all that discussion out of the way, it was time for initiative.

The Rogue went first and hesitated to attack until the Paladin assured him that he had detected them as big-time evil (Dan: I am not sure why he doubted that demons were evil.).  He attacked but without his sneak attack dice, did not do much.  They had a charm and a command plus bows that did 50+ points per hit plus a poison save.  2-3 shots a round.  The head one had Greater Invisibility and eventually turned incorporeal.  But their biggest power was probably their flight.  The Ranger nearly got one shotted.  Our Wizard put one of the flying ones into a Force Wall bubble but attempted to do so in secret so they wouldn’t know to break her concentration.  About the only ones that were confused by this ploy were the players.  Since she was untouchable and the main one was invisible, most of the fire went on the third.  She was taken out.  Once she was out, there wasn’t much for us to do.  The main one had put a compel on our Wizard.  (Dan: Somewhere in here I stunned one of the demons, though it took a few attempts and everyone dogpiled it when it was down).  We assumed that was the reason she was attacking her and she was able to hit despite the incorporeal.  It turns out, the incorporeal only affected weapons and not spells (Dan: This was confusing since by level 5-6 most classes have their weapons count as magic weapons, and they still didn't work).  But we didn’t realize that.  The main one grabbed the body, flew up to the other, hitting the Wizard, and dropped her Force Wall along the way, and handed her over.  That one healed the other one and placed her back down on the wagon.  And then flew up.  The Rogue managed to acrobatically climb a tree to get at her but missed.  The melee guys beat on the one that was out and put her way out since they couldn’t reach the flying one.  The main one was still untouchable and raining destruction from above.

When the second also flew up beyond the Ranger’s guns, our options were few.  The Barbarian switched to a long bow but their bows could outreach his strong bow.  The Wizard was kept up by some Lay on Hands and summoned a Beholder Kin.  The Warlock had a long ranged cantrip which was soon out ranged and Paladin and the Rogue were about left out.  However, the Monk used his Step of the Winds to get an extra move and with his high flight speed was able to reach her.  And managed to stun her.  (We were stunned.)  (Dan: This also took most of my ki points, their saves were high and it took a few tries.)There was some debate as to whether she would instantly plummet the 160+ feet.  Since she was using wings that had to flap and had no hover speed, she fell, taking like 15d6.  And she was still not out.  But now she was stunned and more importantly, on the ground so the idle melee guys pounded her into oblivion.  Their wagon was searched before it was consumed by the fire of the first body but it was in fact the old wagon we found when we first fought.  At this point, the remaining one could fly around and plug us with arrows while staying invisible.  And we could take pot shots as best we could and heal.  But Wade cut short that grind and had her fly off.  So, one greater devil flying around to add to the woes of the land, plus two more devils that will reincarnate as something or someone eventually.  All and all, another unsatisfying end to a fight.

We then started debating our next course of action, again.  We were mostly settled on finding the mad wizard but how.  No one was keen on the boat route without at least a Water Breathing spell.  The Wizard could cast it but she didn’t know it.  And we’ve seen no signs of a means of buying one.  Our best bet might be the mad wizard, ironically.  A See Invisible for all would also be handy for the end game.  Evidently, we’ve advanced from “everything has damage resistance” to “everything has greater invisibility (and magic resistance)”.  Paul had to sign off first.  Brian asked for his vote which was park the cart with the Vistani south of Valaki and then travel overland to the east of the lake.  No one could give a compelling reason not to do that so we may end up doing that.  Sometimes it’s easier to achieve a no veto than a consensus.  We storyboarded the trip to the Vistani and a long rest along the way.  We’ll start from there next time.  Assuming we don’t get waylaid by a lost kitten in Valaki.