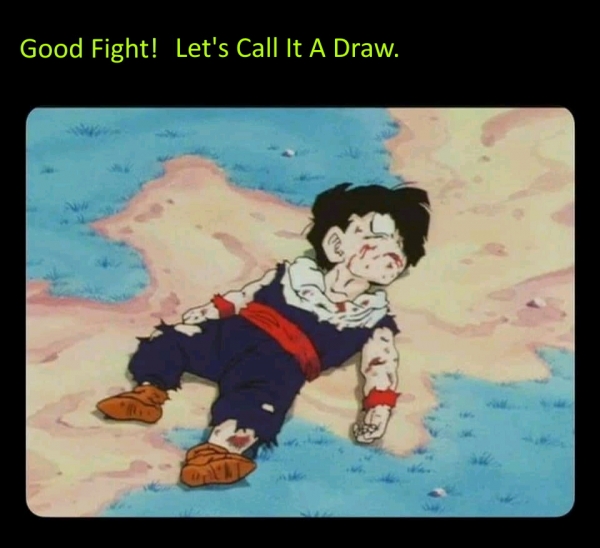 We started as we ended, surrounded by Dire Wolves and Wolf Spirit Swarms with a legendary Fog Giant lurking in a fog cloud.  The only change was that the battered wizard was replaced by a fresh ranger due to player attendance.  For the most part, the wolves continued to attack who they were attacking last time.  With the tight quarters and the swarms on top of people, it was hard to see and target.  When the Giant finally went, he crit and then hit Loki.  He took 70 hit points and was down to 12 before he ever even got a chance to act.  So much for being fresh.  Brian critted 3 times in that first round at which point we had very little chance of surviving.  Duke Q only survived long enough to get in one action since he got racked last time.  Loki disengaged and fled into the forest.

So, we fought on.  Kharn beat on Dire Wolves recklessly against which he at least did full damage.  The Swarms were immune to cold and resistant to weapons so he did less than half damage to them.  Kaladin could make his hands a fire attack, thus getting full damage, so he worked on those.  We found that a Swarm formed each time 4 Dire Wolves were killed.  Loki used his bonus action to Hide using his cloak.  That diminished his damage output but kept him alive.  The Giant spent an action casting Fly and then came after Kaladin.  The Monk fought bravely, hoping for a successful stun attack but to no avail.  Unfortunately, his usual hit and fly tactics would not work against a Giant with reach, flying 60.  Kharn got a berry into Duke Q and they fought Dire Wolves.  One of the Swarms tried to find Loki but he was rolling just enough on his Stealth roll to evade it.  So, much like the fight against the demons, we were whittling down the minions but doing nothing against the villain.  Another invisible flying legendary villain, by the way.

So, then Kaladin finally went down.  Plummeting to the earth with an automatic death fail.  Loki rushed to his aid, once again hiding from the Giant.  The Giant then moved 60 and exactly got into hand to hand with Kharn.  He survived the first hit but not the second.  At that point, we had 2 players with 1 hit point, 1 with 0, and 1 with 12.  Parley? At the other players' insistence, Duke Q started to talk.  He congratulated the Giant on his excellent fighting prowess and suggested we simply go our separate ways as equal forces.  That, of course, was mostly a bluff since he’d been barely touched and we were mostly dead.  However, we did take out 15 of his 16 Dire Wolves.  As payment, he demanded both Duke Q’s and Kharn’s great swords, being a great sword user himself.  Q told him that we needed the frost brand if we were ever to defeat Strahdanya.  That did not move him however he did ask for a counteroffer.  After the email exchange about miscellaneous magic items that we might have forgotten about, people started offering their “junk”.  However, Kharn’s useless Wand of Conducting was argued to be of actual interest to a Giant.  A magic stick that made music.  A poor Persuasion roll was inspired into a better roll and the deal was made.  We traded Duke Q’s backup weapon and a magic item we’d never use, for our lives.  A fair trade.  Thus ended another ass-kicking encounter.

As we took a short rest, we debated following him so that we could avenge our loss (after a long rest and with a bigger party).  But since he was flying, we’d be tracking a single Dire Wolf which seemed highly unlikely.  And the last thing we wanted was to find him too early.  So, we quickly gave up on that idea.  We pressed on, reaching a river feeding into the lake.  The current was a little too swift to swim (67% on a d100), despite two swimmers, a flyer, and a super athlete in the party.  We decided to have Kaladin fly a rope across the chasm.  Brian wanted a “rope skill” roll and opened it up for what DnD skill that might be.  While suggestions were thrown about, Dan created a Rope Use skill on his character sheet and rolled an 18.  (The old Captain Kirk cheater method.)  Brian let that stand but demanded a similar roll to untie the superior knot and save the rope.  He rolled a 17 and we moved on.

We came across a bigger, steeper river just before nightfall.  We took a long rest.  Kharn did his Commune with Nature ritual and could sense a small hut on the other side.  And a lower-than-normal population of fish and animals in the area.  In the morning, we were told it was too far across to use the rope this time.  We almost swam in the lake to get around but people were worried about that Lake Demon.  It would be a 30-minute swim.  We chose to go upstream to look for a better place to cross.  It was hilly and rocky so we had to do some climbing.  But again, Loki had a climb speed, Kaladin could fly, DQ could Levitate and Kharn has a +many climbing roll.  So, no problem except that we passed a cave along the way.

From it, 11 Swarms of Bats emerged and attacked.  Again, we were doing half damage but we didn’t have too much trouble.  Once half were dispersed, they went back into the cave.  Meanwhile, Kharn who was fighting in the cave entrance for better footing thought he heard something big and clawed in there.  Kaladin noticed that the stone was unnaturally flattened, as if it had been melted by great heat.  And at the end, Loki noticed claw scrapes at the entrance as if something had been climbing out of it for decades.  So, likely a Red Dragon.  We debated stopping there so that we could go in with a fuller party, however, a good Arcana roll from our Dragonborne revealed that based on the claw width, we’re talking about a massive (i.e. ancient) sized Dragon.  We decided to run away (quietly) like little girls and move on.  So, yet another unbeatable foe.  When we first arrived in this realm, Kharn warned us to stay on the road and avoid the wilderness.  After a legendary Fog Giant and an Ancient Red Dragon, it appears he was right.  I think we stopped there.  I don’t remember if we crossed the river or not.  We did not level up but we didn’t really do anything either.