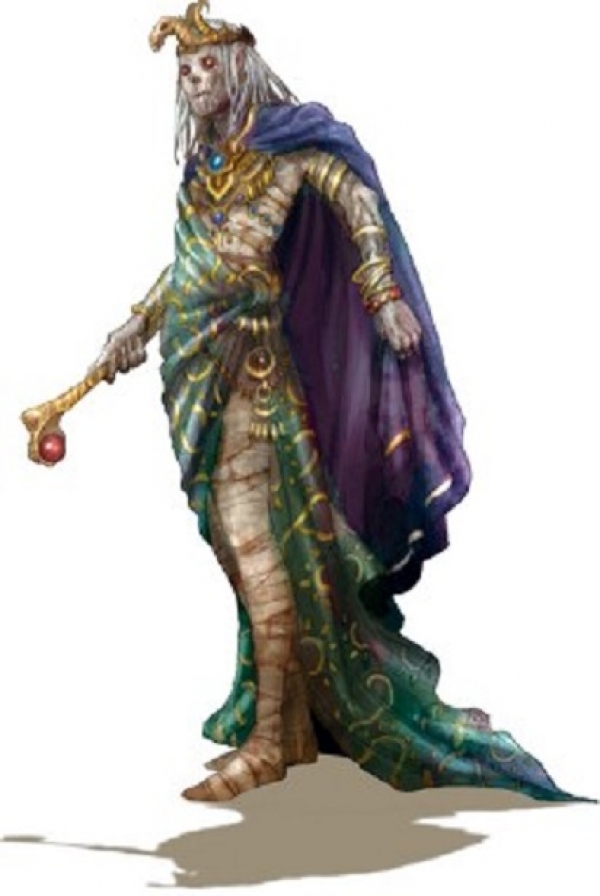 We started by taking a short rest, figuring we’d already taken a couple of rests so one more wasn’t going to hurt us further.  We weren’t really down many powers but it allowed the 2-3 characters that were beat up to get some hit points back.  Next, we did an inventory of our gems.  The had gems labeled 1, 3, 4 and 5 so it seemed like we were missing number 2.  We then discussed where we found the ones we had, assuming a missing one would be in a room where we found none.  That could only be in 2-3 places and although we were fairly certain we had done a thorough search, we decided to invest the time to make sure we hadn’t missed one.  We didn’t want to cause the end of the world for the lack of one gem.  Unfortunately, that took much longer than it needed to but eventually we concluded that there was no more to find.  We headed to the final doors to find 4 recesses in the door in the shapes of the gems we had.  (Circle, triangle, square, and pentagram to correspond to those numbers, as it turns out.)  If we had done that first, maybe it would have saved us an hour searching.

With an eye towards caution, we had the Rogue use her Mage Hand to place the gems.  Once in place, they started to glow and the doors swung open.  In the room, we saw a large 20 sided crystal hovering just above the floor and rotating randomly.  We could see numbers (in this ancient language) on each facet.  1-20.  Above that was a sarcophagus, also hovering.  It was covered in art and words and such.  Also in the room were 4 stone chambers(?).  We did as much investigation as we could without entering the room.  We arrived at no solutions when the Swashbuckler bit the bullet and entered the room.  Some complained about the harshness of that action but it was going to have to happen at some point.  The chambers opened and each held a giant scorpion.  We noticed that also inside each was a pedestal that looked like it could hold a gem.  The sarcophagus opened and a mummy emerged.  The gems fell out of the doors but at least they stayed open.  Initiative was rolled and our Wizard went first.  He shot a Fireball into the room and we were happy to see that the mummy took double damage to fire.  People piled in, basically targeting the mummy at range or engaging a scorpion.

However, things quickly went south.  We “killed” the mummy quickly but it didn’t seem to notice, being already dead.  The scorpions got 3 attacks a round.  Two claws that did decent damage and then grappled for free.  And a stinger that did modest damage but then did 6d6 of poison damage on a missed CON save.  Those that missed were also blinded and if you missed by 5, also paralyzed.  And to make matters worse, because this was unholy ground, we had disadvantage on all our saves.  So the Monk was hit, grappled, blinded and paralyzed.  The Holy Paladin was hit, blinded and paralyzed.  And it was only round 2.  The Rogue used her Mage Hand to place 2 gems on 2 pedestals.  On her next round, she did the other two and the scorpions at least went from huge to merely large.  The Fighter used a bonus action to try to fling the Monk out of a claw but couldn’t best it's STR.  The Sorlock cast lessor restoration on the Holy Paladin and since both conditions stemmed from the poison, he managed to end both.  Our Wizard cast Slow and thankfully all 4 scorpions missed their saves, limiting them to 1 attack.  That may have kept us alive even though 2 saved their next round and another the round after that.

The one with the Monk fell back and another also grappled him.  Between the 2, they took him out, still blind, paralyzed, and grappled.  The Swashbuckler Paladin cast a Moon Beam which was a sustained small AOE that managed to get 3 of them.  Somewhere in there, Row got hit by the mummy and cursed with mummy rot or something.  Despite all this and the mountain of hit points on the scorpions, they started to drop as the mummy was pretty much ignored.  We hoped that taking the scorpions out would somehow help but it did not.  The Holy Paladin finally got to act and did a turn undead on the mummy however before he could go, he had to save against the smoky cloud the mummy had released.  He missed that save but used inspiration and rolled a 20 this time.  The mummy missed his save and had to flee from his Holy power.  It’s quite a power in 5.0.  The level of the undead does not matter and it doesn’t get another save.  It was out of action for 10 rounds as long as we didn’t attack it.  We quickly finished off the scorpions.  On to the puzzle.

So while the Holy Paladin kept it at bay we searched and thought and tried and argued.  We did not have any success.  We tried everything we could think of.  About the time Andy warned us that the turn time was up, the Rogue suggested pushing all 4 gems onto facet 13, the sum of the 4.  (I think the Monk had suggested the sum might mean something earlier.)  When she simply touched the number 13, the crystal shattered, spilling a bunch of treasure on the floor.  And the sarcophagus fell open.  And the mummy charged to attack.  We rerolled initiative and this time it actually took damage.  It did not last long.  The Swashbuckler grabbed the staff which started to talk.  It tried to convince him to run away but he managed to save.  The Rogue took it from him with her Mage Hand which then expired and it fell to the floor.

So we ignored the evil staff and searched through the treasure.  We then realized Row was taking continual damage.  A survey of our abilities revealed that we had no way to remove a curse.  The offer of help from the staff was voted down.  We determined that the Crown of Wound Closure would keep Row alive, hopefully until we could get him to a Cleric.  So we took a short rest to allow him to attune to it, pumping healing magic into him to keep him conscious. While that was going on, our Wizard identified the magic items we’d gotten. A +2 long bow that went to the Swashbuckler.  A set of +2 AC bracers that went to the Monk.  And a venom dagger that went to the Rouge.  We left the dungeon and got to our supply train.  (We probably should have done something with the mummy.)  We can place Row in the wagon along with a wrapped up evil staff.  That’s still going to be a problem.  Do we give it to Row so he can research how to destroy it? Is he one bad save away from becoming a corrupted 9th level Wizard? I think we stopped there.