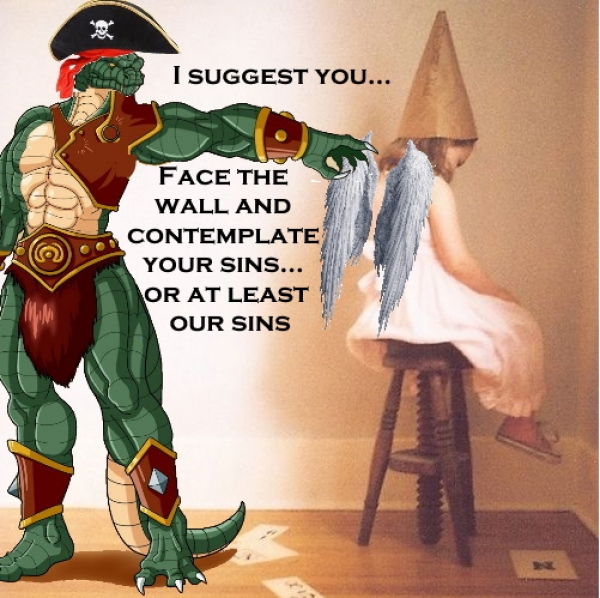 Andy had all kinds of problems getting us logged into the game.  This was particularly frustrating since it was working just a few days before.  He rebooted and reconfigured and we were about to give up and switch to something else when he finally found a combination that worked.  So, we finally started.  We left off, freshly returned to Jailynn.  But we also returned to the problem we left with, what to do about this evil sentient artifact staff.  NPC Row reiterated that he did not expect it to be intelligent so he was unsure how to destroy it.  He needed some research time which all agreed was reasonable.  But what to do with it in the meantime.  He wanted to leave it locked up in the vault at the school, figuring it would be less noticed here than back in the big city of Long Bridge.  The problem was that anyone that knew we had it, such as Lady Arnow, would likely show up in our home town.  We could hide it ourselves like in the ocean or in the sewers.  Or keep it with us.  It was endless.  Eventually, Wade played the metagaming card, stating that no matter what we did, if Andy wanted to take the staff and start a plotline, he would.  Better just do what the NPC (Andy) suggested and move on.  This did not sit well with some but it was the only way to get past it.  I think Dave dropped off around here. (Daniel: He seemed depressed about the future of Democracy and got drunk to deal with it.)

We noted that a new Lord had moved into town, bringing with him a new marshal and a bunch of guards/troops.  We asked around and no one had anything bad to say about them, perse.  It was just different.  Crime was down but so was supervision.  The sewers had been sealed up, much to the consternation of the Rogue who still planned to make it her base.  We talked the halfling sheriff who had been made permanent in the 6 months we were gone but under the new marshal.  She said that piracy was up on the river now that traffic had increased.  The Red Dragons or some such.  Rumor has it they are loosely affiliated with Lord Scorpix.  They also periportally had a big lizard creature that fought with them.  Some said it was a dragon but most dismissed that unlikely.  We decided to do something about it.  We went to our ship and talked to Commander Price.  She seemed unconcerned.  “There are always pirates.”  But we informed her to make the ship battle-worthy.  She said she had a commission in Long Bridge already lined up.  So, we agreed to go with her, check on our magic item feelers, and if we were attacked by pirates, so much the better.  A few of us had a couple things to do in town that day but after some wasted time, we left in the morning.  (Daniel: Cedric mentioned "Gentle Repose" scrolls and the local priest overheard and took the opportunity to reward the party with two scrolls.  Cedric inscribed it into his hybrid ritual tome and kept the other to put any dead party members on ice for easier resurrection.)

We had no problems getting to Long Bridge.  The Wizard asked how long it would take and Price said just the day.  If we wanted a ride back, she’d be leaving at sunset.  The Wizard pointed out that this was still our ship and asked her to wait for us.  We went into town to check on our magic item searches.  Andy was not prepared for that Pandora’s Box so he said we had found nothing.  Truthfully, our “reasonable” wants had probably changed and the “unreasonable” wants, we couldn’t afford and couldn’t just buy anyway.  We milled around the market when the Wizard spotted Marisha the jungle girl watching us.  She quickly ducked away and we decided to not pursue her.  The Wizard found a diary in an estate sellers booth that was actually full of magical theories so he bought that.  The Rogue bought a book about how-to pick-up women to aid in her pursuit of Commander Price.  The Swashbuckler bought some small toys he intended to give to the kids in Jailynn.  Eventually, we got back to the ship and sailed.  (Daniel: Cedric bought a few books on religion in the hopes of beefing his knowledge of religion ie getting the religion proficiency.  It appears he is the defacto party cleric.)

On the 3rd watch we were attacked by some snake-headed semi-aquatic creatures who climbed onto the ship.  They had a snake bite with 2d6 of extra poison damage or a longbow or two scimitar attacks.  Their to hit and AC were low but they had a lot of hit points to grind through.  They also had an innate suggestion spell and advantage on all saves.  That first round, Andy critted the Monk, doing near max damage.  That was more than half his hit points in a single blow and he was stunned.  (Somewhere along the way, the optional system shock rules got turned on.  Andy didn't want to get into that argument so he just went with it.)  The swashbuckler critted twice in his first round, tacking on extra smite damage but still didn’t drop one.  The Wizard hit 5 of them with a Slow but two saved and with advantage, they others saved soon enough.  But it helped.  For the most part, Andy needed a crit to hit the 3 dex based melee guys but he managed to do so multiple times.  It seemed like half his hits were crits but crits do a ton of damage.  Some got hurt but no one went out.  The Sorlock, who was eldritch blasting them off the ship, got targeted by that Suggestion power several times but used multiple powers like luck to fend most of them off.  (Daniel: The first suggestion was to look at the rear of ship and to not look forward.  Cedric tried to get around this by activating his divine soul, growing energy wings and flying up and then foward so he could attack while looking back.  The next 2 suggestions were trickier like "don't speak for eight hours".  It's a nasty spell that Cedric blew through all his luck and Divine Favor to resist.)  The last two monsters managed to get away into the water.  We got some longbows but that was about it.  We continued into Jailynn without issue.  Andy was unavailable in two weeks so we agreed to play in one week.