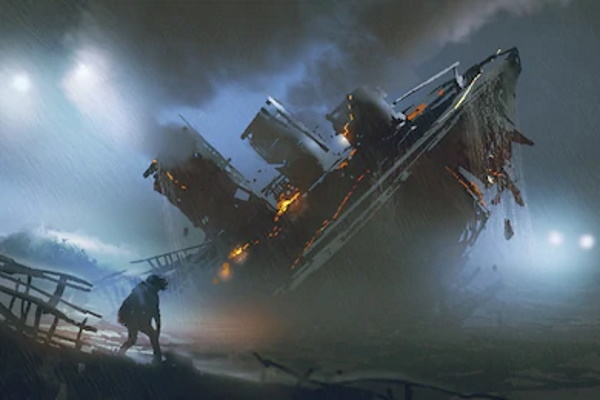 We continued on our plan to fight the Red Sail pirates who, rumor has it, are working for Lord Scorpix.  Everyone their own way in Jailynn.  The Fighter went to hang out at the stables.  The Sorlock studied the books on religion he had just purchased.  The Swashbuckler prepared the gifts he bought, planning to leave them at the doorsteps of poor children during the night.  The Paladin trained at the temple.  The Wizard helped Row with his research on the staff.  The Rogue looked into buying a building with access to the sewers.  The Monk, I can’t remember.  The Monk and the Rogue ended up in the bar where Someone Halfhand told them he had information about the pirates.  They have been hanging out at an inn called the Reluctant Pig, newly built on the north road out of town.  It was not on the river but had a jetty nearby where skiffs could be tied up nearby.  The Fighter noticed 3 strangers pulling into the stable with a wagon.  They seemed to have red armor hidden under their cloaks.  When they went into the mercantile to purchase goods, he went searching for his comrades.

The Rogue used her Invisibility to hid on the wagon but it was too small.  She got on the horse instead which did not like it but there wasn’t much it could do about it.  The rest of the party gathered and we debated on what to do.  We assumed they’d be heading to the inn in the north so the Wizard Messaged the Rogue that we’d meet her there.  There was much debate about whether to get on the ship and sail north or get our horses and ride north.  We decided to stay together and ride north after telling Commander Row to move the ship that way in case we needed it.  The Rogue overheard enough of their talk to confirm that these guys were the Red Sail pirates and the seemed to be capturing specific high place locals for a booty paid by Scorpix.  Unfortunately, they mentioned hostages already caught, being stashed at some nearby secret base.  So that complicated things.

They arrived at the smithy behind the inn and unloaded.  And then went into the inn for an ale, we assume waiting for someone.  Most went in but the Swashbuckler stayed out.  There were some suspicious looks and chatter with the bartender but no one forced any action.  The Swashbuckler noticed our ship pull up near.  Later he saw a ship with red sails sailing downriver, straight for it.  He alerted the rest and everyone headed to the river bank as best the could.  The Wizard, Rogue and Fighter grabbed a skiff and rowed out.  The Paladin with his magic swimming gauntlets and the Monk chose to swim out.  The Paladin had his horse swim out since it’s half movement swim of 30 was better than his.  The Sorlock sprouted his angel wings to follow but ended up on the back of the horse as well.  Before we could do much, we saw a wyvern with a rider fly towards our ship.  The Swashbuckler took a shot or two but the range was too great for any else.

The relative movement rates of the players plus the movements of the ships and the distance made the start of the fight very complicated.  It was sort of a jumble mess from there.  The wyvern snatched Commander Price and flew her to their ship.  The Wizard didn’t want to hurt her so he shot a Fireball at their sails, hoping to slow them down.  A couple more long-range shots were taken.  That fire occupied the pirates but there were plenty of marines with crossbows shooting at the skiff.  Price was stowed below and the wyvern returned without a rider to attack the rowing Fighter.  The Monk and Paladin managed to get to our ship just after a pirate caster fired his own Fireball at our ship’s deck.  Luckily the crew was below deck from the wyvern attack.  The Paladin lead them on fire extinguishing duties.  The Swashbuckler and the Scorlock were the further behind and shot arrows and cantrips as the could.  There was some debate on the skiff as to which ship to make for but with Price captive and they having a higher-level wizard than ours, it seemed like a direct attack was called for.

The Wizard shot another Fireball on their deck, targeting like 15-20 guys.  It was a lot of damage, both to the men and the ship, but only a couple of sailors were taken out.  The Rogue cast Grease to add to the confusion.  Once besides their ship, the Rogue popped up to fire a Burning Hands and the Wizard did his last Fireball.  Again, lots of damage but there were few deaths.  The Swashbuckler did manage to kill their caster with his bow.  The Monk made a mighty leap and climb to get onto their ship.  As usual, Andy crit him with his first attack.  Some of them started fleeing the burning, listing ship.  The Fighter ran through the Grease to get in the middle of them and unleashed his Fear attack from his maul.  Many missed their saves and dove for the water including the wyvern rider.  The captain stood tall and unleashed his Polearm master attacks.  The Monk hit a couple and headed down into the hull.  He found Commander Price in a steel cage as the ship was taking on water.  We fell asleep about there for it was 2 AM.  Half of us are on their burning sinking ship. The Paladin is on our ship, ready to kill or capture any pirates that try to board it.  The Swashbucklers are still trying to get caught up.  I think the Captain is the only villain left on their ship but there are many injured marines and sailors as well.  Somehow, we’ve got to get Price out of there before it sinks or blows up, without getting killed.  And if we can find charts as to where their secret base is, even better.