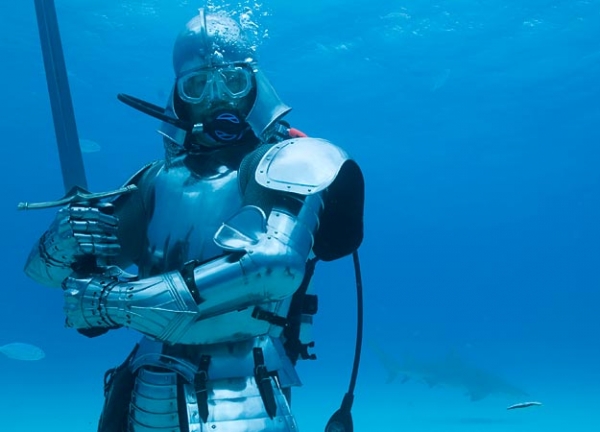 After a brief recap as to where we were, we started back up at the top of the order.  The Rogue and the Fighter took swings at the still stunned Captain Bogs.  The Rogue then jumping into the cargo hold to examine the locks holding Commander Price and the Fighter staying engaged with him.  The Monk provided cover for the Rogue by putting himself in front of the door between 5 marine pirates and her.  The Swashbuckler got onto our ship, figuring he could contribute with his bow and fight off any pirates that managed to get aboard.  He sent his warhorse towards the sinking enemy ship with the Sorlock still on his back.  The Sorlock and the Wizard continued to snipe at the pirates in the water.  The Paladin got onto our ship but then dove back in and started swimming towards the sinking ship.  Some of the pirates were still feared and were fleeing the sinking ship and some were simply smart enough to flee the sinking ship.  The only ones of importance were the Wyvern which was fleeing at 80 feet a round and its rider who was swimming after it.

The next round, the Wizard realized that our ship was protected and that the high AC Monk was going to need help against 5 unharmed marines, jumped into the hold and hit 4 of them with a Shatter. He also figured we’d need to fight through them to get to the captain’s quarters behind them if we were going to get any clues as to the location of their base.  Unfortunately, that Shatter didn’t do much damage.  The Rogue opened the lock on the cage with ease on the first try and moved onto the manacles (target DC 20).  The Monk continued to Dodge with his Ki and bash on the marines.  About this time, the ship “went” and it became evident to all that it wouldn’t last longer than a round or two.  The Fighter swung at the Captain as he fled off the side.  The rest of the pirates, including the marines down below, started jumping off the ship as well.  The Swashbuckler took long-range longbow shots at the Wyvern (400 is still long-range).  The Wizard was informed that the captain’s quarters was on a level between the deck and the hold.  He used Misty Step to get to the door, his movement to get in, and his action to search for anything that looked like it might help.  He rolled poorly and found some generic maps but then used an inspiration die to reroll and find the captain’s log.  Meanwhile, the Rogue was not able to pick the next lock.  She used her inspiration and then the Monk’s inspiration and got it open.

The Fighter got into the skiff as did Price, the Monk, and the Rogue.  The Paladin dove into the water on the other side of the ship after the fleeing captain however the Sorlock managed to take his last two hit points.  The Wizard shoved the log and maps into a handy chest that looked waterproof and jumped out the back window.  About then, the fire reached the gun powder and the ship exploded.  Everybody except the Swashbuckler and the Wizard who happened to be outside the blast zone, had to take 40 points, half on a DEX save.  I think everyone but the Fighter managed to save although it took the Sorlock a luck point and a divine favor to do so.  No one went out, to Andy’s disappointment.  So, everyone went into the water as the skiff was destroyed.  The war horse was winked out as well but the Sorlock was still flying.  So, it was every man for himself and most swam towards our ship as best they could.  With the following exceptions.

The Swashbuckler continued to shoot at the Wyvern which had finally saved from the Fear and came back to retrieve his rider.  He managed to hit several times but it kept saving against his Ensnaring Strikes.  (As a large creature, it was getting advantage on it’s already considerable STR save.)  On the last try, it finally failed and tumbled into the water.  However, it was flying low and they didn’t take much damage.  The next round the rider freed it from the vines and they flew off.  The Sorlock, with his backstory hatred of pirates, continued to blast them out of the water.  The Paladin dove into depths of the river, hoping to retrieve some valuable information from the Captain’s sinking corpse.  He missed his first Perception roll and it was getting murkier.  The next round he invoked the power of his god to illuminate his sword.  With inspiration from 2 players, he finally managed to catch a glimpse of metal and retrieve the body.  After making it back to the ship, we realized that no one had seen the Fighter since the explosion.  All feared the worse, although he still had the Water Breathing spell on him so there was room for debate.  Everybody searched and the Monk managed to spot him walking on the river bed in his heavy armor.  Evidently, he had unilaterally decided that despite his 20 strength, proficiency in athletics, and remarkable athlete power from his fighter subclass, that he had no chance of swimming in heavy armor and just assumed he sank.  And then role-played in silence (Dan: passive aggressive Roleplaying for the win!).  But he was retrieved.

Along with the log and the maps, the chest turned out to be his treasure chest.  It contained some coinage, gems, and a scroll of Tashia’s Hideous Laughter which went to the Wizard and of Guiding Bolt which is only useable by a Cleric so we were going to donate it to the church.  Captain Bogs had another pirate medallion that the Paladin took.  He figured his god guided him to it for some grand purpose.  He also had 3 potions.  Healing, which went to the quick-footed Monk, Water Breathing, which went to the bottom walking Fighter, and Climbing which went to the Swashbuckler.  Lastly, he had a Ring of Evasion which allowed a reroll on a missed Dex save.  It has 3 charges and recharges 1-3 per long rest.  That would be of use to most anyone but it was decided to go to the Sorlock who hadn’t gotten any useful magic items thus far.  The journal was in code but the Wizard managed to decode it enough to determine their base was likely on an island that was once home to a dragon cult.  It has a big statue on it and the sailor characters knew where it was.  The Wyvern was last seen heading that direction.  There was some debate as to how damaged the ship was but everyone wanted a long rest regardless.  It’s not like we’ll be able to outsail a flying Wyvern.  So, we returned to Jailyn, and repairs were started.  The town sheriff found us and said that the new governor had heard of our success and wanted to invite us to dinner to meet us.  We decided to tackle that next time and called it a night.
Read 116 times Last modified on Tuesday, 13 October 2020 08:14
Tweet
Published in Andy's Game
Tagged under