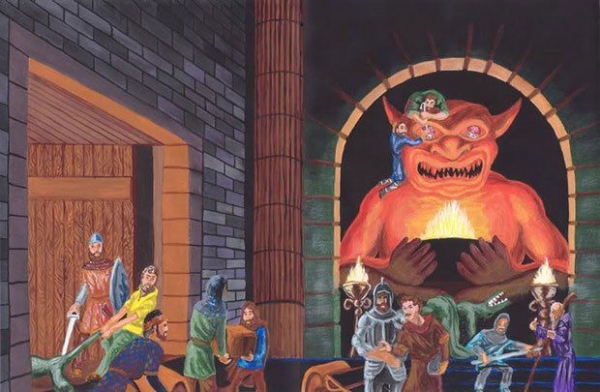 My people are from the northern hinterlands, worshipers of the Norse pantheon.  They have been employed as mercenaries at Castle Stormgiant for generations and have established an enclave in the city.  Apart but accepted.  He is from a family well known for their military service and success.  More of foot soldiers, fighters, and sergeants than noble generals and knights.  He was serving the army when there was an attempt to clear out some undead infestation of the dwarven underground that had started leaking into Castle Stormgiant’s lands.  A division of troops went in.  Uko’s company (~40 guys?) got cut off and were just hanging on when some great undead shadow demon swept in.  The survivors were killed and all were drained.  When the pale bodies were found, they were burned.  But miraculously Uko was not quite dead.  He was returned to Castle Stormgiant with little hope of recovery.  When he regained consciousness, he recalled seeing a gleaming light and had concentrated on that.  Obviously, he was distraught to learn that all his comrades were dead.  Survivor’s guilt.  Why me? For some reason, Lady Chevra took an interest in his case and when he had recovered enough, she suggested Uko work in the garden as therapy to recover his body and spirit.  The Gardener would check on him from time to time.  Eventually, he recovered, weaker in body but wiser from the experience.  However, the army wasn’t sure what to do with him.  Would you want a guy whose whole company was killed in your company? When the gardener started a new troubleshooting squad, Uko was added, on extended leave from the army.  Recently he’s come to realize that he must have survived for a reason.  And it is to serve Thor, smite evil and destroy undead.

Gilda Tor, a half elf Fighter with intentions of becoming a Bard eventually played by Brian O’Neill

The Burning Man, a half elf Rogue/Druid played by Dave Shimota

Hawhtorne Wells, a human Wizard with a couple of dual classed levels in Ranger played by Andy

Aoexan Bronte, a human Monk with intentions of dual classing into Wizard eventually

Uko Saknusson, a human Cleric with a couple of dual classed levels in Fighter played by David Green

Thing 1, a human Paladin with maybe intentions of dual classing into Cleric eventually played by Paul

The Gardner sends the player into the farmland to quietly investigate what is happening to the crops.  Because they do not what cause a panic that the cities food source might be at risk.  They discover many destroyed fields.  At each field, there was a detonation place with what looked to be a destroyed pod at its center.  Each night brought more destroyed fields.

The players are directed to a farm in the middle of the problem.  They staked out the farm and in the middle of the night the watch spotted some warg carrying goblins, creeping around in the dark.   There are 4 wargs and goblin riders that were taken out.  In pursuit of the last warg, they ran into 4 more pairs and some sort plant person half-buried in the field.  This second battle was tougher and the damage was adding up.  The Monk attempts to get to the plant thing but was entangled by its roots.  Players started to drop.  The Wizard’s Shield spell expired and at AC 10, despite his Ranger hit points, was knocked out.  The eventual Bard and the Druid soon followed, both bleeding out.  The Monk and the Cleric were down to a handful of hit points but they took out the last of the wargs although I think one ran off.  While the Cleric bandaged the bleeding, the Monk retrieve some oil and lit up the plant.  It went up quickly and exploded in a cloud of this damaging pollen.  The newly conscious Druid had a Precipitation spell ready which seemed to do some good.

They questioned a Goblin.  Basically, the plan was to take over the kingdom by ruining the crops.  That seemed ambitious but it was a Goblin plan.  After some lies eventually, he confessed to there being a camp in the nearby hills.  Eventually, the Druid charmed him.    So, what to do.  It will take days to recover the hit points lost via cure lights from the Cleric and Druid.  The castle was 4 days away so that healing should probably be done here.  Hopefully, the two Paladins are on their way.  We were given enough experience to level up but that takes training back at the castle and will take weeks.  So, what do we do? Welcome to 1e vs 5e.