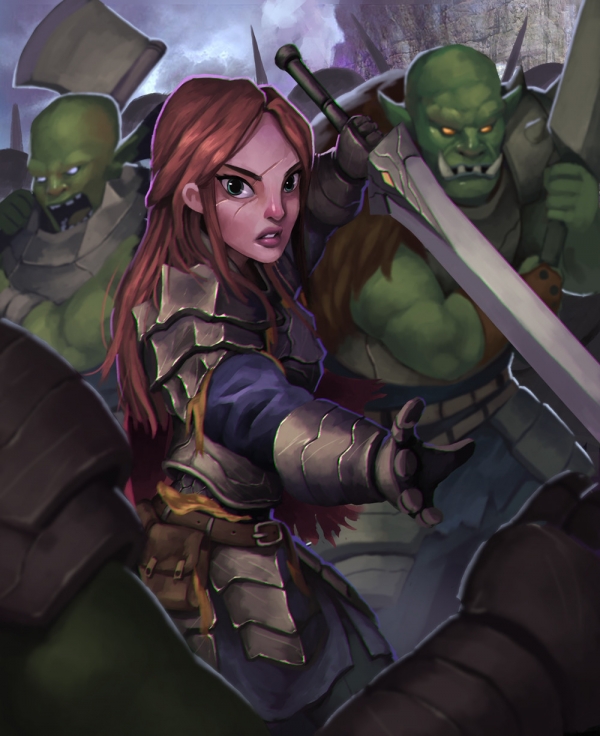 We took a late morning in the barn.  Ramadan, the female human Paladin showed up as our reinforcements.  We debated what to do and concluded that we would heal up faster here than the time it would take to get back to the castle.  The Cleric and Druid used their spells to heal people up getting them up to around half.  The Paladin kicked 6 more.  We figured we wouldn’t be able to survive the same battle, but maybe we could survive half a battle.  Although once we saw what Ramadan could do, maybe the wasn’t true.  There was some debate about our charmed goblin but we’d given our word to let him go.  The Paladin agreed with honoring one’s word.  The Druid, the Monk and the eventual Bard followed the tracks of the goblins back into the hills.  However, that was a day’s journey so they had to turn back to get back to the farm by nightfall.  The Wizard stayed at the farm and helped clean up.  The Cleric and Paladin searched around the neighboring farms.  Nobody found anything of interest however having a Paladin “on the case” seemed to raise the morale of the farmers.  We posted guards that night but thankfully no attack came.  The next morning, another batch of healing got us close to full.  (Jon also allowed a hit point for the rest although as per the rules it would require 24 hours of complete rest.)

We decided to head into the hills, getting an early start in hopes of maximizing our daylight.  Once into the hills, we could sense someone watching us.  The Druid and Monk hung back in the shadows while the rest moved forward.  They sported some well-equipped orcs in hills.  Were they here looking for goblins or us?  Regardless, they were watching us now.  The rest of the party came to a goblin camp but it was abandoned.  The sneakers caught up and we discussed.  Since it was almost evening, we decided to camp here.  It was defensible and there were some lean-tos.  We also found a sapling of the plant creatures.  It appeared that there was once a whole patch of them here but this one was left behind.  It was crying.  The eventual Bard transplanted it into a bucket and soothed it with song.  We decided to parley with the orcs, figuring they already knew we were here.  Maybe we could live and let live and trade information on the goblins.  Some had reservations on this plan but as it was debated, the orcs attacked.

So, there were like 5 orcs with spears and 5 tough orcs with swords, one of which was slightly bigger.  The Paladin charged that one.  Unfortunately, on his warhorse, he moved 24” while the rest of us moved 12” or 9”.  He killed that guy in a round but was then quickly surrounded.  Some advanced on the rest of the party who moved up as they could.  Remember that its half move and attack so we were really moving 6” and 4”.  They were engaged.  The Cleric did a Hold Person on two of the regular orcs but the tough one saved.  Held meant automatic hit, max damage, and double attacks.  Brutal.  They didn’t last long but the tough one did.  The Druid tried to shoot his bow into the Paladin’s melee but he hit the Paladin as well.  Speaking of the Paladin, she was awesome.  But then she missed a couple of times and they hit a couple of times.  Despite the contribution of her horse, she was knocked out.  But evidently, Cavaliers can still function at negative hit points, but not attack.  The disengage rules are suicidal so after she did lay on hands to keep from bleeding out, all she could do was stay on her horse and wait for the killing blow.

The eventual Bard managed to get down there and engage one of the 4 remaining.  The Monk and the Wizard had the last of the others engaged so the Cleric was able to disengage, move to within 6” and cast another Hold Person, getting two of them.  The Wizard disengaged and enjoyed the free-to-hit and max damage on a held one.  The Druid took his place on the one.  The eventual Bard’s dropped the one she was on and the one that had been beating on the Paladin asked for a parley.  Too late! The Cleric finished him off and the last one was finally disarmed by the Monk.  After that, he was beaten to death.  The Cleric did some bandaging and use his last cure to get the Paladin above 0.  The leader had a scroll of Ice Storm in a case.  (Welcome to random treasure in 1e.)  They also had 4 elven swords that turned out to be +1 and would shed light in their name was said in elvish.  And some coins and armor.  It started to rain, ruining any chances of following the tracks of the orcs or the goblins.

We camped overnight and went back to the castle to report, by way of the farm.  The Gardner said the swords were standard issue for elvin infantry 100+ years ago and the orcs likely found them in a cache.  The Odorous Oak was consulted about the plant.  He didn’t know anything but suggested it be raised.  Perhaps for goodness and niceness. The Druid took that on.  We then leveled up although Jon didn’t give us anything for the fight, figuring the night was not over.  The Gardener gave us another mission.  Travel to a city to the northwest that seemed to be having trouble.  They were not part of this kingdom so we had to be subtle (I’m looking at you Paladin.) but he didn’t want trouble on our boarders.  We traveled without a random encounter.  We got as far as walking into town but BTO had to sign off.  Andy also had to go so it was an early night.  4000 exp was awarded and those that leveled up, were allowed to do so despite not being in the castle.  That whole process is still being worked out.  Jon will go back to Blades next time so it’ll be at least a month before we play this again.