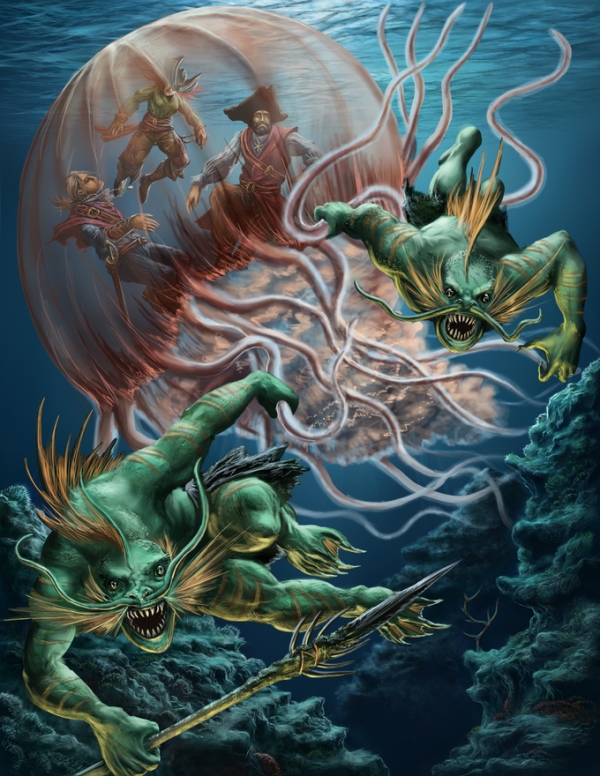 We started, still at the Trent glade.  The Druid wanted to cast a Ceremony spell to ease the passing of the dead Trents.  Unfortunately, he did not have it memorized so we’d have to overnight there.  However, unlike other games, we do not own that river boat.  It seemed unlikely the captain or the merchant would be willing to wait another day.  Time is money, after all.  While the Druid desire was reasonable and Dave’s roleplaying was applauded, it just didn’t seem practical.  DG pointed out that before the invention of the Unearthed Arcana book, we would have just said we do so.  Why couldn’t we just do that? Jon ended the discussion by saying that the Ceremony spell could be cast like a ritual a la 5e.  So that was done after which the Druid was given the bowl from last time.  Once on the boat, the Cleric gave thanks to Thor for their victorious battle.  We never did attempt to do an Identify on the bowl or the ring but the Paladin who had the ring didn’t show so we sort of forgot about it.  Identify in 1e is problematic, evidently.

We continued down the river.  The weather continued to be poor.  The Cleric had a dream about being underwater, almost drowning and following a light all during a terrible lightning storm.  He awoke to a terrible lightning storm.  This was very similar to his near-death experience in his tragic backstory so he took it as a message from Thor.  That’s what Cleric do.  The captain became worried about the storm and made for the center of the river to ride it out.  Suddenly grappling hooks on ropes appeared from under the water.  About 4 per side.  Characters with edge weapons rush to cut the lines.  Those without, the Cleric and Monk, ready ranged weapons.  The next round, lizard men started boarding.  Attacks were made.  It wasn’t too tough although the merchant ended up in the wrong place and was dropped.  There was one that was different, at the back of the boat but the Cleric hit him with a Hold Person.  The next round, the eventual Bard killed it automatically.  Two more like it surfaced and started to cast spells.  But we won initiative and our Cleric got them into a Silence spell before theirs went off.  At this point, the lizard men fled but with the harsh disengage rules, I think they were all cut down.  The two casters did get back under however.  The Cleric was told he felt he needed to go under the water so he shed his shield and war hammer and dove in.  Much to the surprise of the rest.

The eventual Bard and the Monk followed him.  The players were then reminded that we had gotten a potion of Water Breathing from the last night.  However, we remembered that the missing Paladin had it.  Jon said that the attending Paladin had it.  She took a swig, handed it to the Wizard and went in in her heavy armor.  The Wizard took a pull and started to dive in as well.  The Druid elected to stay behind and save the lives of the merchant and a sell sword.  Meanwhile, under the water, we saw a sunken column on which the ropes that had tried to secure the boat were tied.  The two casters we fleeing to a cave entrance.  The fast-moving Monk closed but when they turned and started doing claw claw tail attacks, he quickly started to fall back.  The eventual Bard was next but she got grabbed and was running out of air.  The Cleric surfaced, took the potion from the Wizard as he dove in, and swam back to the eventual Bard.  The Paladin finish off the grappler so she headed to the surface and drank the last dose of potion.  It was just the two monsters so other than the lack of air, it wasn’t too tough.  The Cleric lead the way into the cave but the Monk had to turn back as he (and the Druid) were the odd men out on the potion.

The cave led to a series of chambers that eventually ended in a room with air.  We found a ton of copper and some gems.  On the far wall was a constructed wall with a Thorish symbol on it however there was a locked gate.  Unfortunately, the Open Locks characters did not come down and the Wizard did not have his Knock memorized.  The 4 that did, tried to bend the bars but failed.  The eventual Bard went back for the lizard bodies, since evidently, we forgot to search them.  Someone else got the thieves.  They had a dicey moment or two when they ran out of air but managed to get into the chamber.  Before trying to open the lock, the Monk tried to bend the bars and made a 7% roll.  Evidently the 18/00 Paladin had loosened them.  He then opened the lock for good measure and then the Druid closed it for practice.  Eventually the eventual Bard got back and one of them had the key.  It also had 5 rings on one hand and 5 rings on its tail.  When removed from the tail, they magically resized.  Once the gate was open, the Cleric placed his hand of the symbol and a secret door was opened to the last chamber.

In there was a human body with its head crushed by a war hammer with a symbol of Thor on it.  The hammer was still there, in his skull.  The odd thing was that the body was in good shape, i.e. fresh but there was no blood from the wound so not fresh.  On the far wall was a large circular carving.  There were 12 sectors around the rim, each with what looked like a button.  No one knew the language but those that knew Dwarvish, thought it might be some sort of ancient Dwarvish.  Attention then turned to the body however several players continued to puzzle on the graphic Jon provided.  I think Paul realized that the marks were sort of words that corresponded to places on the continent.  It helped if you’ve play in this world before.  I think eventually, each sector was associated with a city or keep or such.  However, this particular place was in the middle of no where so if this was a portal network as was suspected, where were we? And it was noted that the Citadel of the Monk was identified by its original name which places this portal as being very old.  Meanwhile, back on the body.  It had nothing identifying on it.  Only that it wore what would be under heavy armor.  Eventually the Cleric of Thor could not resist the Hammer of Thor and picked it up.  The human instantly regenerated and stood up.

“Wait wait wait.  What’s going on”.  What followed was a couple hours of questioning.  I’ll try to summarize what we learned eventually.  The year he remembered was around 300 hundred years ago.  Despite his repeated denials, everyone assumed he was a vampire, however his reflection showed in the Monk’s mirror.  He did admit that he was “not dead” but did not like the term “undead”.  The Paladin said that he rated “off the scale” in evil.  The Wizard tried to Web him but he had Spell Resistance.  He said his name was Casey and worked for the Order of the Keys.  Neither of which meant anything to anyone.  He did seem to recognize our Paladin.  Odd, but I wouldn’t be surprised if Paul’s back history went back 300 years.  He said the order gathered information and sold it.  I think he admitted the portal was a portal.  He had a shadowy tattoo(?) of a key on his hand.  He wanted to just leave but we could not allow such a big evil loose so eventually we attacked him.  That was pretty futile however the Monk stunned him at which point everyone piled on and he was killed again.  The hammer was placed on his head and stopped his regeneration.  Now what?

Through experimentation, we discovered that the magic sword would also work so the Druid sacrificed his.  We tried to cut off his head but it started to grow back.  We simply didn’t know what to do.  We decided to put his body in a crate with a sword in him and take him back to the boat.  Eventually take it back to Stormgiant and hand the problem over to top men.  Unfortunately, we were currently heading the opposite direction so it’ll be a while.  We did discover that the “key” could be transfer from him to one of us.  The Wizard volunteered to try to open the portal to the place we were heading.  When he got close, the “key” became an actual key and the button was a keyhole.  When a purplish glow lit up, he stepped through.  And never returned.  Hopefully he’ll be waiting for us there.  Assuming he doesn’t go back 300 years or was disintegrated because he didn’t say the magic words.  The rest went back to the boat.  Through experimentation, we learned that the hammer was +2 and would return if thrown.  The 10 rings would give a hand-to-hand fighter magic hands of a yet to be determined bonus.  It’s pretty obvious who got them.  3000 experience was granted.